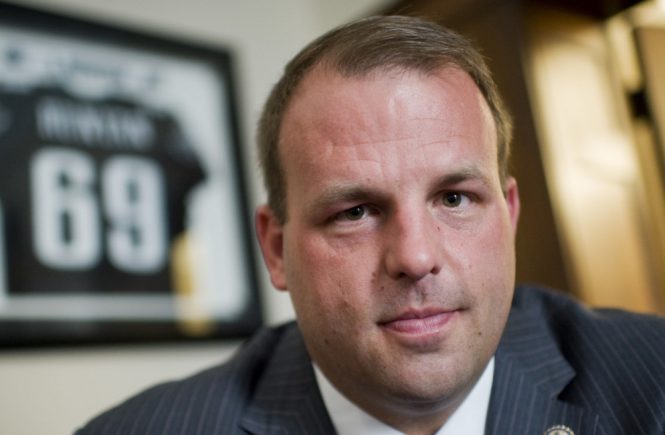 The Story of a Football Player Turned Congressman

Jon Daniel Runyan was born on November 27, 1973 and is an American politician. Runyan was also the U.S. Representative from 2011 to 2015 for New Jersey’s 3rd congressional district right. Currently, Runyan is a member of the Republican Party. However, before entering into politics, he was a record-breaking American football offensive tackle in the National Football League. Runyan played there for fourteen seasons. He was also a participant in the 2003 Pro Bowl after the 2002 NFL season. Born in Flint, Michigan Runyan was the son of an employee of General Motors. He had shown extreme progress in sports.

Houston Oilers drafted Runyan in the 1996 NFL Draft and played in the team Philadelphia Eagles and San Diego Chargers later on. Runyan was also the only remaining active NFL player who had played for the Oilers. Runyan liked to play college football at Michigan. In 1995, he was an All-Big Ten Conference selection. Additionally, he had been an All-State (Michigan) selection in high school basketball and was also a two-time state champion shot putter.

On February 14, 2000, Runyan was signed by the Philadelphia Eagles to a six-year, $30 million contract. He was kept as an unrestricted free agent. Due to the contract, he became the highest paid offensive lineman in NFL history at that point of time. The Pro Bowl selected Runyan in 2002.

The Eagles had announced that Runyan had re-signed with the team on March 24, 2006. This time the contract was for with a three years. A remarkable streak for an offensive lineman was held by Runyan. He had started 190 successive regular season games. Among active NFL players, this was the second longest streak in 2008. All 18 playoff games his teams have appeared in have also been started by him.

Runyan had a microfacture for which he had surgery on his right knee on January 28, 2009 and Runyan’s contract expired with the Eagles in February 2009. Although he worked out for the Eagles in September, but did not sign a contract. He was then signed by the San Diego Chargers and played in five games before finally retiring. In various published reports indicated that Runyan was interested in running and Runyan announced his congressional bid on November 24, 2009. Runyan defeated Adler on November 2, 2010 by 50%–47% and became the fourth NFL player after Jack Kemp, Steve Largent, and Heath Shuler to be elected to Congress.

Runyan also won the seat against John Adler, the Democratic incumbent for New Jersey’s 3rd congressional district. The next term, Runyan defeated attorney Shelley Adler and was re-elected. Adler had also defeated Jason Sansone and secured Democratic nomination. Adler’s had 45% of votes and Runyan had 54%.

After expressing frustration with his fellow Republicans, Runyan announced that he wouldn’t seek re-election, over the government shutdown.

Runyan financed 15 parts of legislation as of June 2012. 92% of the time, he votes alongside his party. He supported key votes which include the Balanced budget amendment, the payroll tax cut, defunding of National Public Radio, and the Republican budget plan. Runyan has had consistent commentary on federal and consumer debt.

Runyan was also one of the sponsors in June 2013 to pass an amendment to H.R. 2217. This was for the Department of Homeland Security Appropriations Act of 2014 (source: MaidMarines). This increased the number of employees for the Adequate Fire and Emergency Response (SAFER) Grants, and the required help to Firefighter Grants (FIRE) by $2.5 million each.

However, Runyan announced not seeking re-election to Congress in 2014 on November 6, 2013. Runyan has three children with his wife, Loretta. The family resides in Mount Laurel. His son, Jon Runyan Jr., is a 2015 is also progressive in sports and is in commitment for the Michigan Wolverines football program. Runyan has taken a course in entrepreneurship.